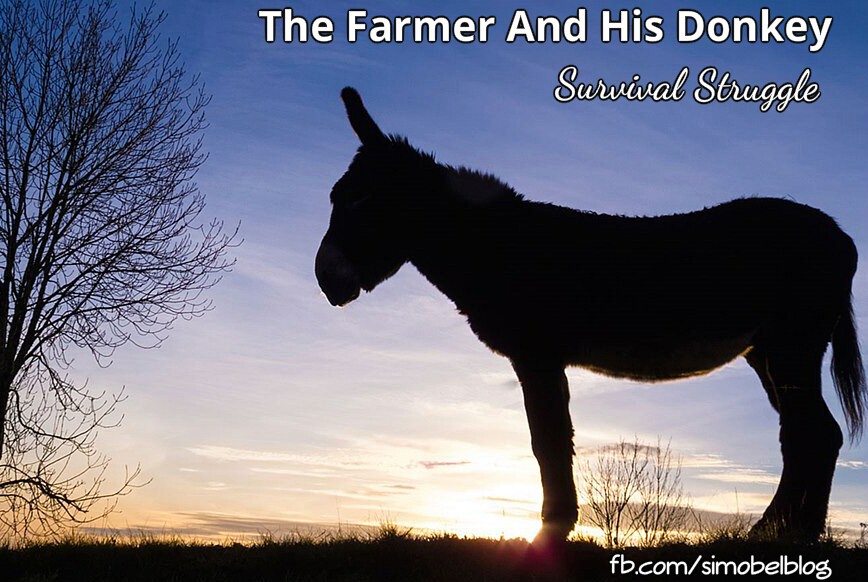 Sometime ago, I was told an intriguing story by my dad, the story of a farmer and his donkey. The man, who is a farmer, employs the donkey for several useful tasks within his farm and home settlement. The donkey has stayed with the family for several years that it at times of inactivity has the freedom to move about as it will. It was vitally a useful member of the family.

The farmer had a dried up well that has been in disuse for a while. The well was very deep. It was covered with wood and dirt. The owner was unaware of the fact that the wood under had decayed substantially. One evening, the donkey, in one of its swings about the premise fell into the well. The donkey was very big and heavy. The owner beckoned on his neighbors to help get the donkey out of the well. All attempts to get it out from the well proved abortive. The owner decided to bury the donkey inside the well by covering the well and the donkey with dirt as there was nothing more he could do to save the life of the animal. He figured that that was the only way to save the animal from continual pains and suffering inside the well. With the help of his neighbors, he gathered as much dirt he could to cover the donkey and the well. They poured in the dirt. The man noticed that as the dirt was poured instead of burying the donkey it simply shook its body and got on top of the dirt. As they poured more dirt, the donkey repeated the action and stood on top of the dirt. The more dirt they poured the more the donkey came on its top until it was able to get out of the well on its own, completely unaided. It shook off all the dirt that were poured on it and used them as steps to its freedom.

The dirt bags in our life are the unpalatable circumstances that tend to discourage us. When you encounter some unpleasantness, all you need do is shake them off. Don’t get buried up by distasteful circumstances. Let the distasteful situations be the instrument that will occasion your freedom. For every challenge you face in life, know that there is a solution. All you need to do is present a fight, a strong resistance that will occasion your freedom. No circumstance is so terrible that one cannot shake off and come on stream with life.

Most times, we face challenges that seem out of our capabilities; we get overwhelmed by difficult situations. It will be interesting to acknowledge the truth that no situation is far beyond your control. Offer a strong resistance, one strong enough to vanquish the threat. When you face your adversity squarely, you will find out that it is not as frightening as it claims to be. You are strong enough to face anything that stands in your way. Believe in yourself!!

3 Things to Do When You Are Anxious

IMPORTANT: 7 Things You Should Not Allow In Your Life

7 Ways to Raise Your Vibration